I haven't just been chasing muskrats...

I've been a busy spinner and knitter these past few months. Since my much beloved Ashford Traditional is in storage down south, I had to purchase a new-to-me wheel. Luckily I found a nice slightly used Louet s10 on eBay. 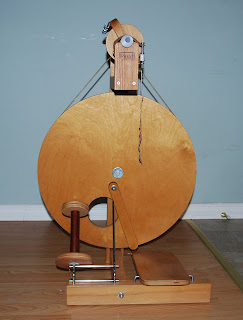 However, with the move up here to Inuvik and the high cost of living in the arctic, I made a deal with myself to make back the costs of the wheel and perhaps some extra $$ by selling hand-dyed handspun yarn. So by mid-October with the town's X'mas Craft Fair looming on the horizon I dyed up huge batch of merino rovings and began spinning and spinning and spinning.A skein or two a night and slowly my yarn stash grew until I ended up with this: 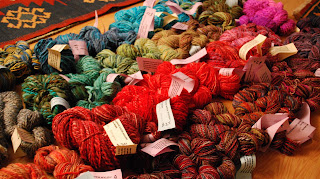 The craft fair was a few weeks ago and I pretty much sold everything! I even now have folks calling me up for yarn as last minute X'mas gifts. The craft fair was a blast and I made back my costs of a new wheel, raw fibre, fund a small dyeing workshop for locals and have a little left over to throw a nice Christmas shindig.
It was nice to meet all the other knitters and crocheters in town. There's a horrendous lack of yarn in this town and it's nice to be able to offer something that other crafters would like. I also got a list of folks that are interested in learning how to knit, dye or spin. Sounds like my dance card is already filling up!
Though the fibre wasn't 100 mile friendly, I did order from Black Lamb which sells merino roving mill ends. So at least I was able to support a Canadian business that sells rovings that would have otherwise ended up in the landfill. I also used a bunch of fleece that I stuffed into corners of our car when we drove up.

I also have been doing a bit of knitting these last few months. Over the Labour Day weekend, I knitted up my Caribou Jacket while on a camping/hiking trip along the Dempster. It was pretty much made it a no-brainer knit as I scope out the landscape for critters sort of project.

The yarn was made from a hodgepodge of Ashford merino rovings and my own hand-dyed merino and silk that I spun into worsted weight single ply. I was going for something rustic and would echo the gorgeous array of colours of the land during this short but spectacular season. 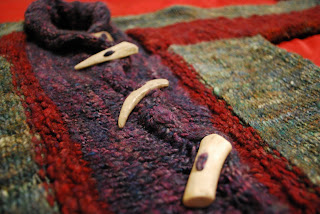 The buttons were made from local caribou antler that I carved. They add a nice bit of arctic whimsy. I've been really getting into carving antler and DH has bought us a Dremel kit so I can release my inner-carver.
The construction is a variation fo EZs Bog Jacket. You all know how much I love that Bog Jacket. I made the front a bit short and then picked up the side stitches for the inside front edge and knitted up the purple panel. I tossed in a couple of short rows around the neck for a fuller collar.
Easy Peasy!
Though I mostly aimed to sell yarn at the Craft Fair I did knit up a couple items. 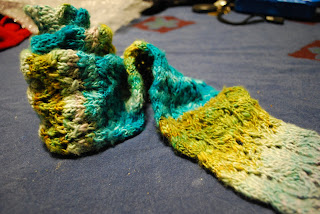 Lace Scarf. I love this colourway. It's Jacquard Dyes Turquoise and Chartreuse. 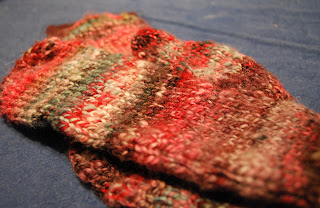 Mitts! Can't have enough mitts up here. I think next year I'll do up a couple pairs of thrummed mitts. I think they'll do well up here. 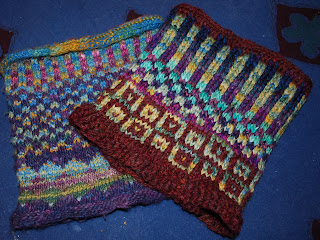 Fair Isle Neckwarmers! My neckwarmer has literally saved my neck and cheek and lips and nose while walking around this arctic wonderland. Fair Isle neckwarmers are a great way for the beginner to learn stranding on. There's no shaping and it works up quick. The thicker material also helps the neckwarmer stay up.
With the craft fair done and pretty much all my Christmas knitting complete, I've been scheming my next project. The local quilters guild has fearlessly asked me to join them in an exhibit titled "Colours of the Delta". As breathtaking the colours were during the turning of the colours of the foilage, I am smitten with winter colour and textures: 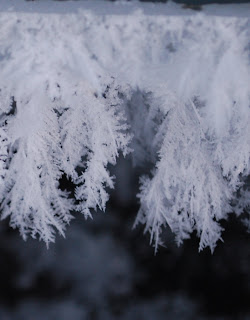 I'm drawing up a couple of designs for a winterscape. Yes we are now in our 'dark' months with only a few hours of thin light. Then sun doesn't rise about the horizon and won't pop back up until the new year. However there are still some spectacular moments in the winter's silver light. 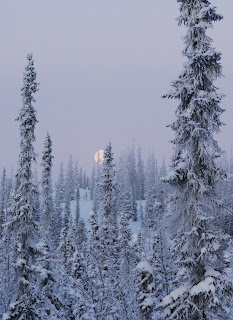